After a public outcry, the Japanese-style restaurant Hefengcun Huaishi, in Kunming (southwest China), has stopped serving sushi on near naked and fair-skinned young beauties.

Apparently the establishment in question recruited the women from a local college, and then had them lying face-up on the table, their bodies covered with sushi, flowers, and other foodstuffs. No doubt making for very exotic plates indeed.

The owners however appear unrepentant despite the furore, and claim not to have bowed under local pressure. Rather, they said that it was merely a promotional campaign that has now finished.

Li Ailing, the manager of the restaurant said, â€œThe purpose of this promotion is to spread Japanese culture.â€ 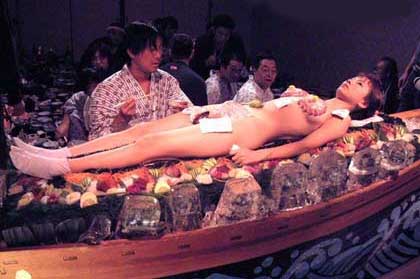 Going by that picture, it certainly beats flower arranging, or the quiet and rigid environs associated with the tea ceremony.